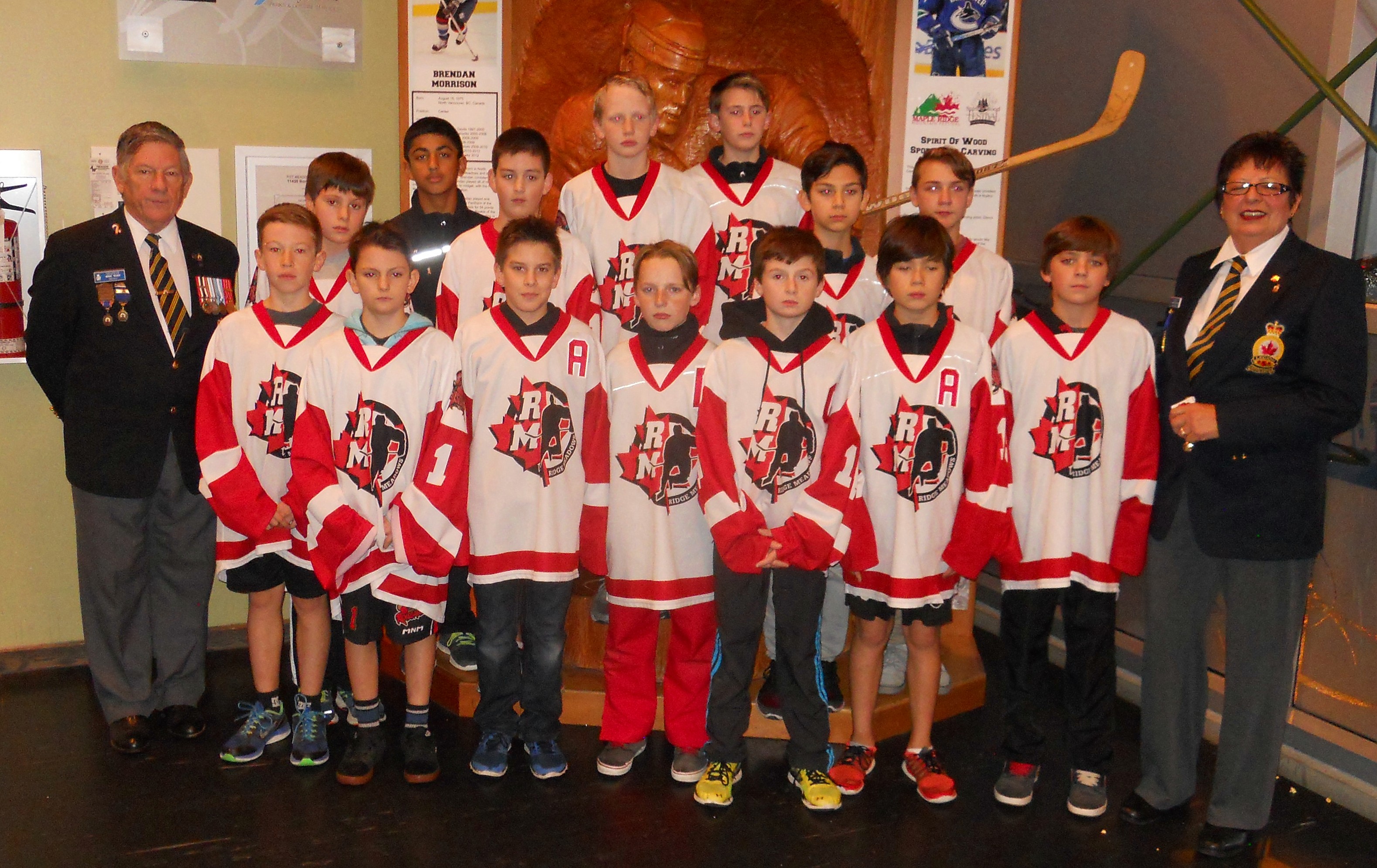 President Mike Ward and Poppy Chair Diane Cougar accept a cheque for $800.00 for our local Poppy Fund from the players of the RM Peewee A3 Hockey Team. The youngsters achieved $775.00 of this in a two-hour period
and then rounded it up with a $25.00 donation from their own funds. 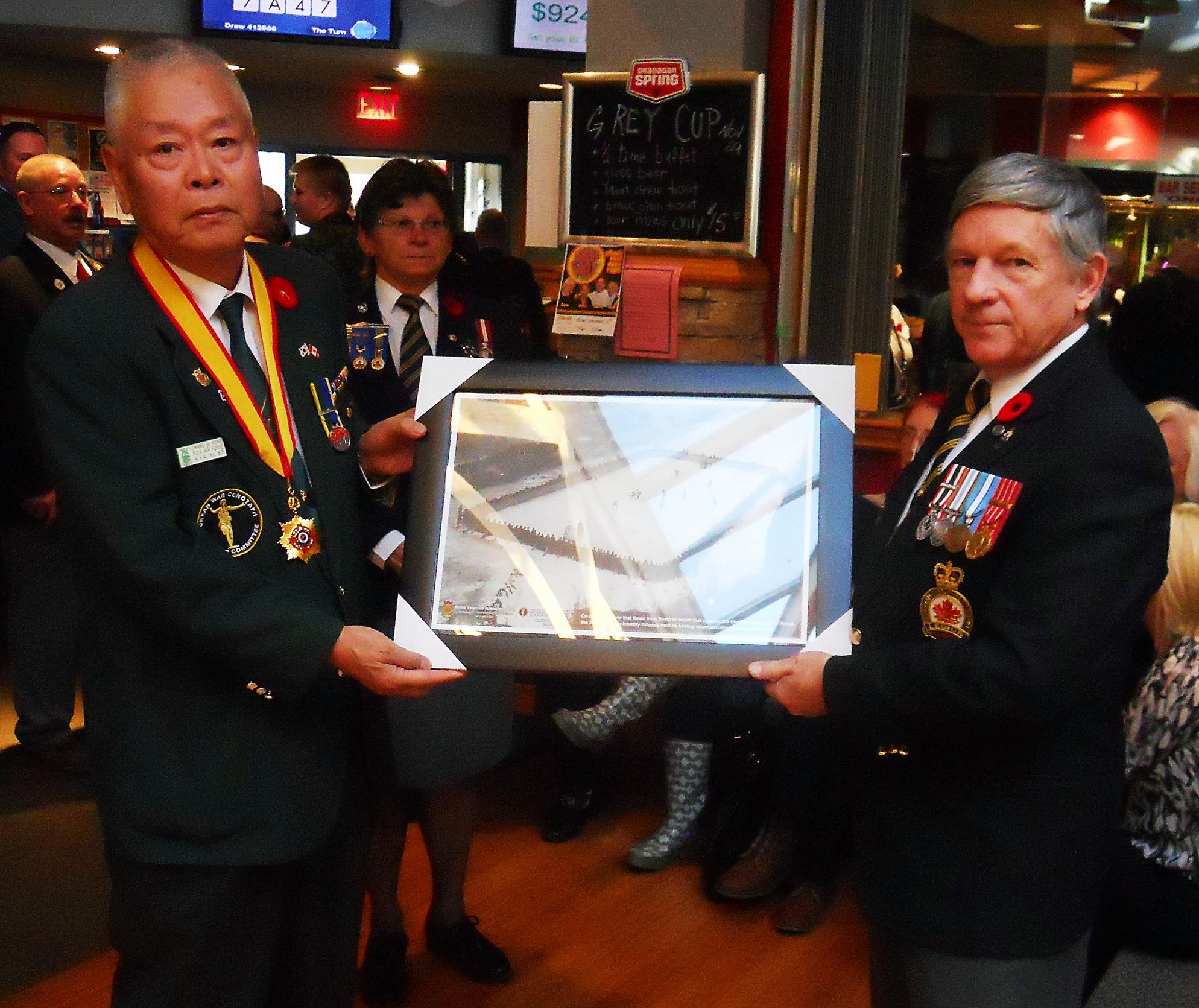 Chang Uy Hong, President of the Korean War Cenotaph Committee presented Branch President Mike Ward with a framed photograph of the famous hockey game played on the Imjin River in Korea in 1953 between the PPCLI and the Royal 22e Regiment. 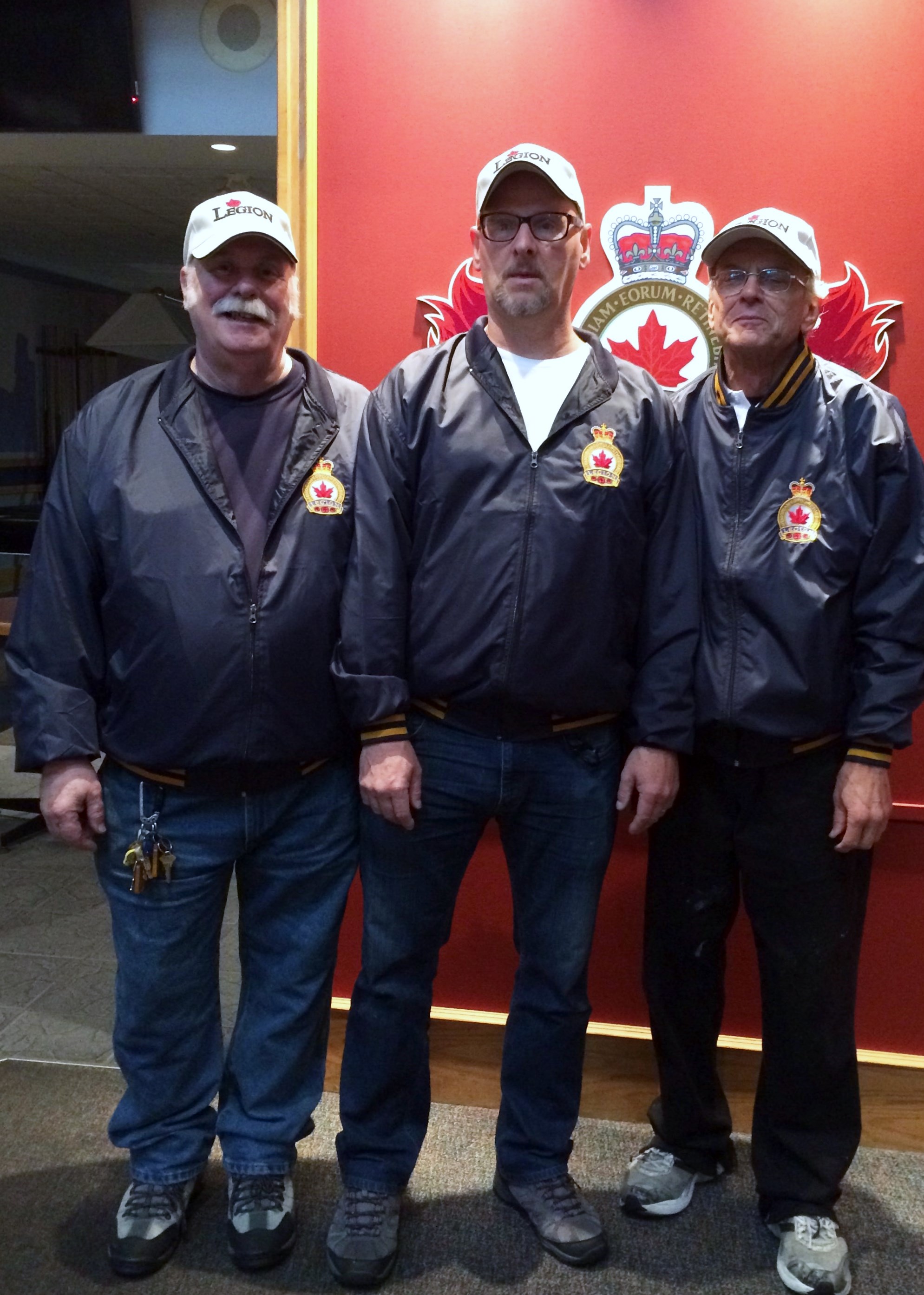 Left to right – Lamont, Andrew and Grant – our 3 amazing Caretakers of our Branch and Housing buildings :)) 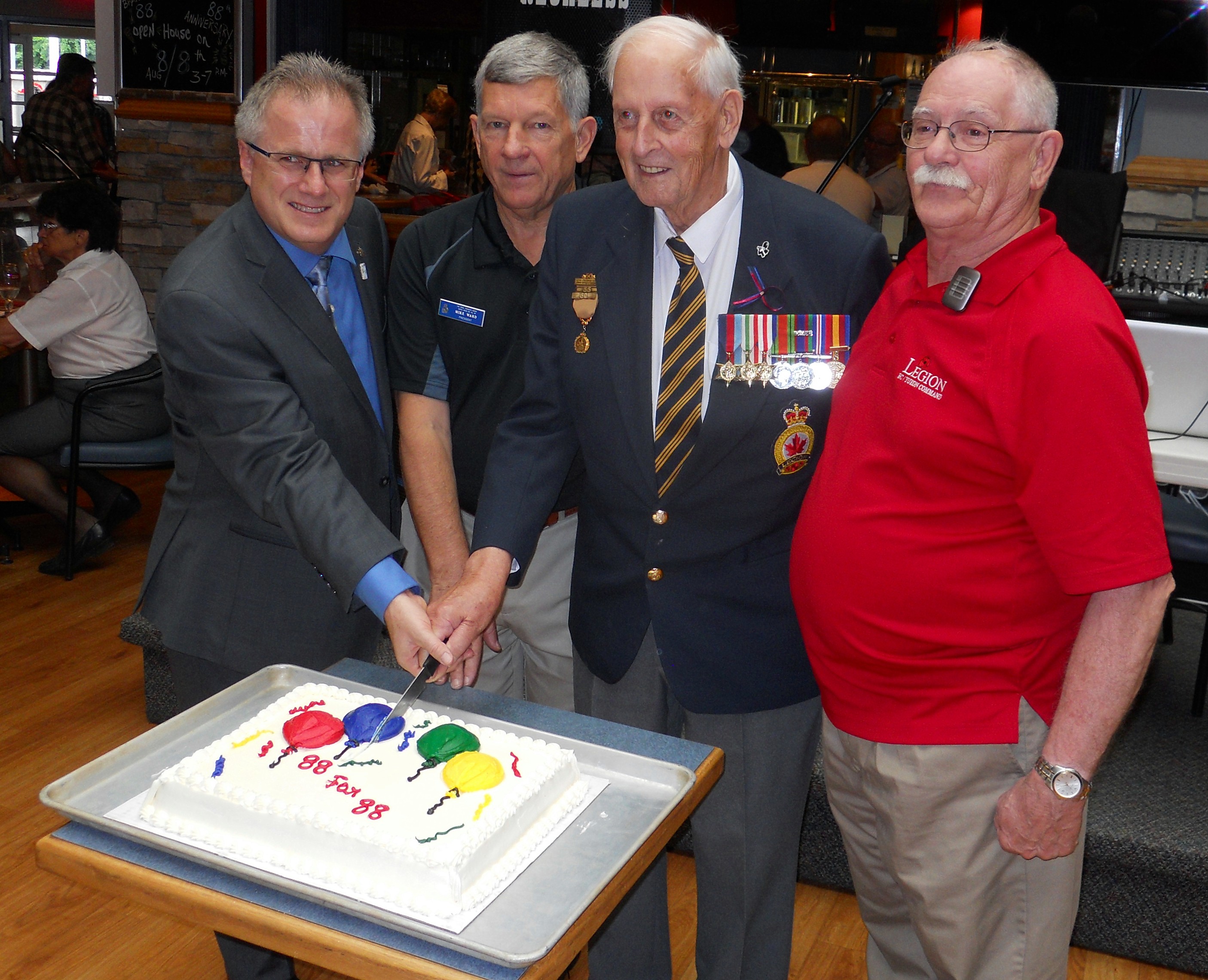 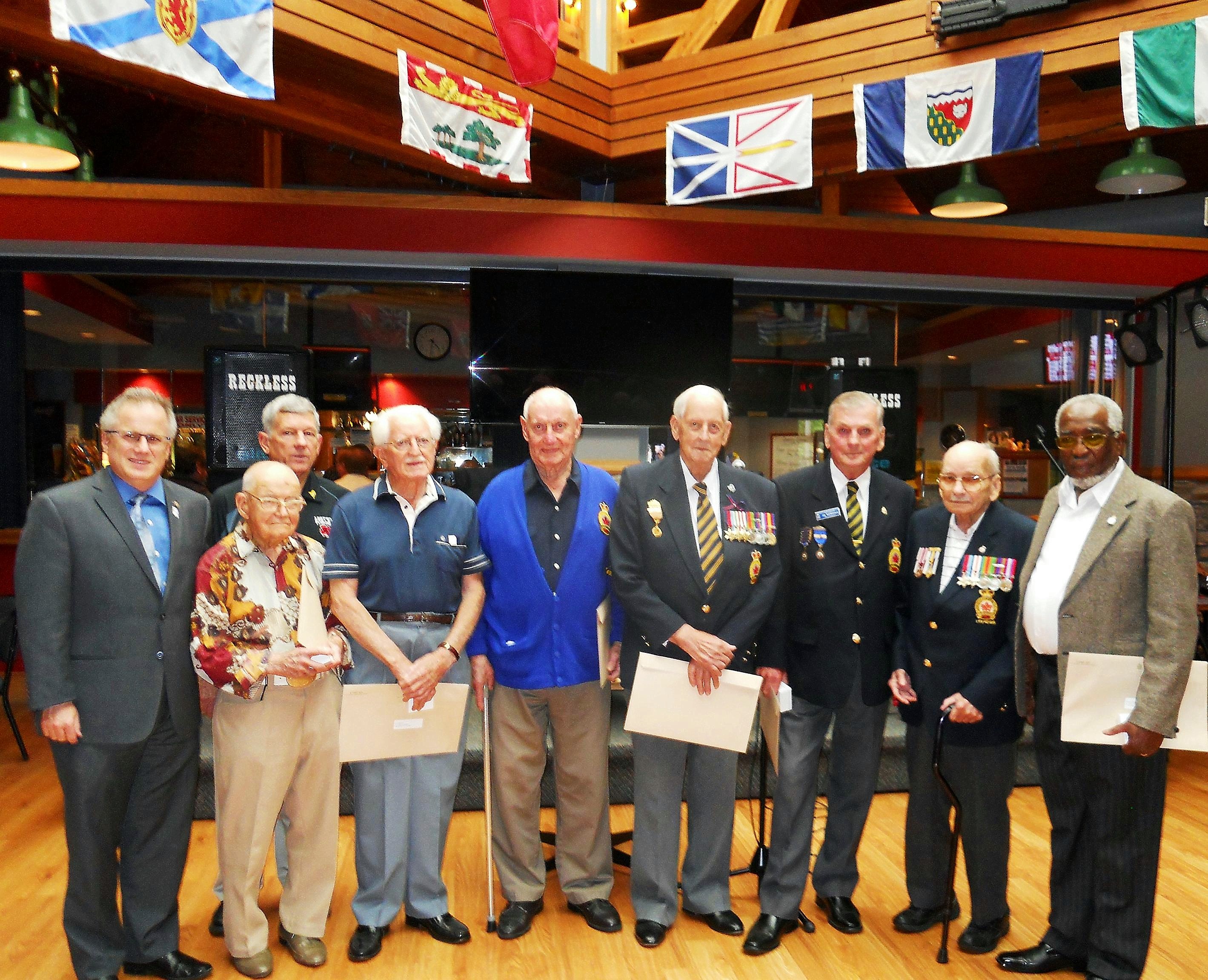 The Maple Ridge Veterans each received a special commemorative pin and personalized citation from the Ministry of Veterans Affairs for their outstanding service during WWII. The citations were signed by Prime Minister Harper and Erin O’Toole, Minister of Veterans Affairs The presentations were made by Honours & Awards Chair Jim MacDonald at the Branch Anniversary Open House marking our 88th consecutive year of serving our Veterans and the community.
Shown left to right are: Marc Dalton MLA, John Athey, Branch President Mike Ward, Garth Parkinson, Bob Aebig, Bill Mitchell, Honours & Awards Chair Jim MacDonald, Eugene Lambright and Sam Jordan. Three other Veterans were also honoured but unable to attend.. These were Ronald Taylor, Boyd Affleck and Ian Smith, 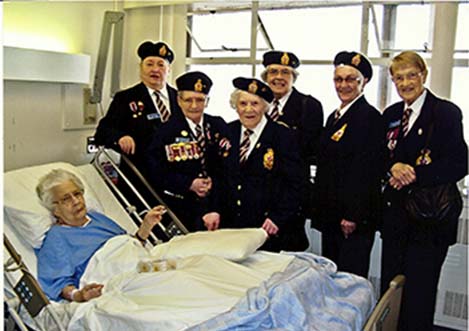 Edna Hayward has belonged to the Royal Canadian Legion Ladies Auxiliary for 60 years. She was recuperating in Ridge Meadows Hospital and her friends went to visit her on Valentine’s Day to present her with her 60 Year Service Pin. 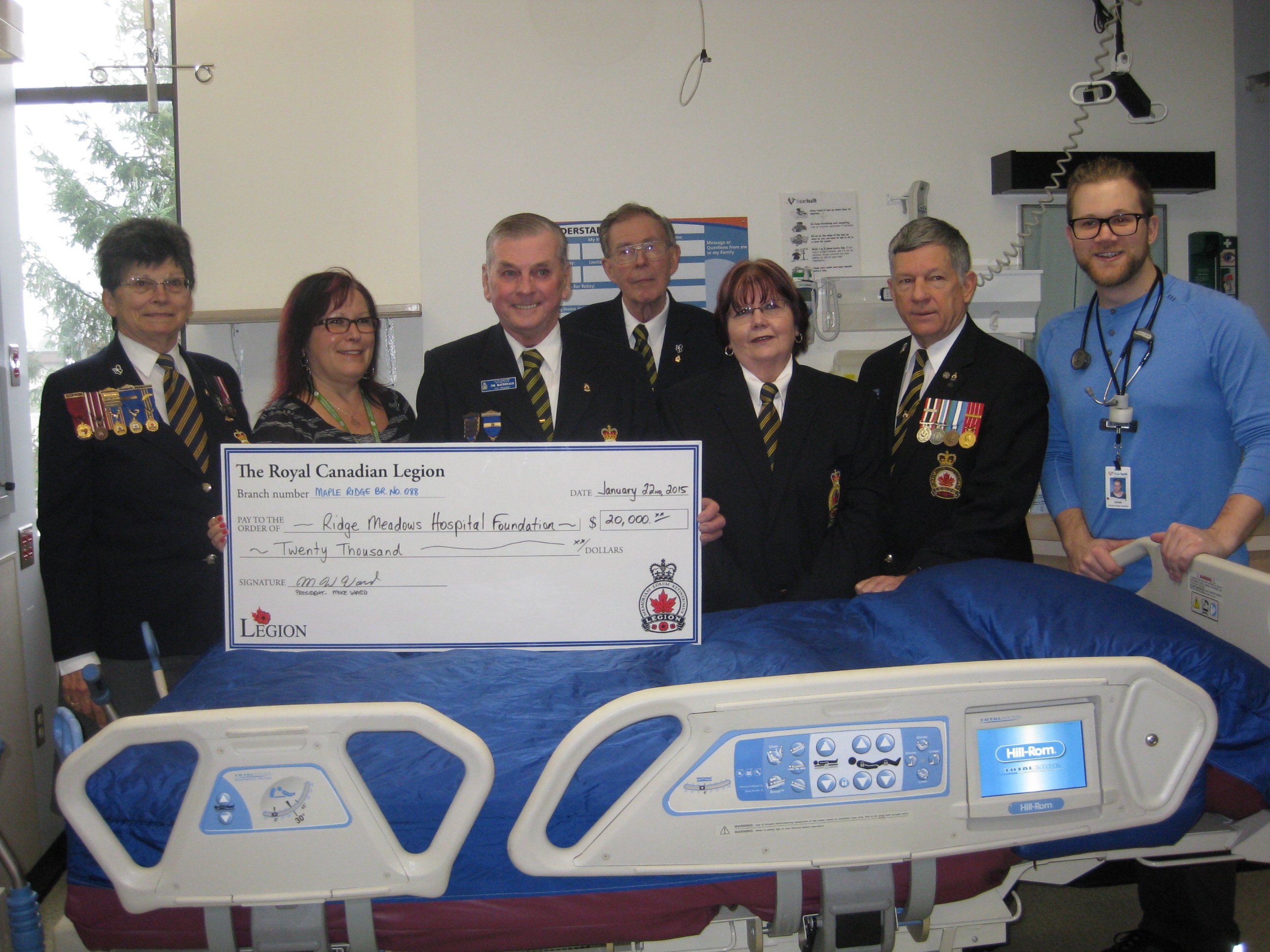 Members of the Branch 88 Executive paid a visit to the Intensive Care Unit of Ridge Meadows Hospital. Shown in the photo are Comrades Margaret Kury, Jim MacDonald, Peter Kane, Lynda Cratty and President Mike Ward presenting a cheque for $20,000.00 to RM Hospital Foundation Executive Director Laura Cherrille and Dean Stewart, RN in the ICU. This donation comes from our Poppy Fund.

This is the second year in a row that Branch 88 has funded a state-of-the-art critical care bed which provides enhanced care for complex ICU situations.  The critical care bed is equipped with a mattress that is capable of various motions.  These motions aid in reducing fluid build-up in the chest (to avoid pneumonia) and to also reduce pressure on the skin of bed-bound patients, thus decreasing the occurrence of bed sores.  Another important feature of the bed is a built-in scale that aids caregivers in monitoring the weight of patients for dramatic changes in fluid volumes, and to determine the proper medication dosages.  In addition, these beds are specifically designed to support early mobility strategies to assist in the recovery phase.  It has capabilities of moving patients to both sitting and standing positions, improving their strength and independence and ultimately reducing their length of stay and the associated costs.  The beds are equipped with various monitors, indicators, safeties and alarms that provide caregivers with the tools for the optimum in patient well-being.  This critical care bed plays an essential role in delivering superior health care at Ridge Meadows Hospital to its sickest and most fragile patients.